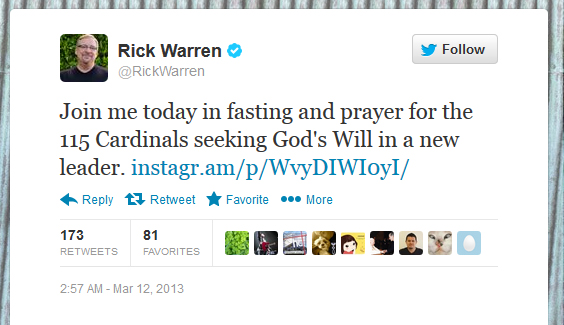 When men like Warren come out and side with Rome it always makes it so much easier for the Bible believer to cut through the religious jargon they use to bamboozle the unwary among God’s people, and see what they really are at heart. Roman Catholicism is antichristianity and apostasy personified in our age. When claimed evangelicals like Warren, Al Mohler and Russel Moore (respectively President and Dean of Theology at SBC seminary) side publicly with Papal antichristianity then God’s people should hear alarm bells and get away from them as far as possible!

By tweeting what he did, Warren indicates that he believes – and wants the world to know he does – that he desires God’s blessing to rest on the Church of Rome; that the Pope who emerges will be God’s man; that he can join with the Cardinals in spiritual fellowship and seek God together with them in prayer. He is serious enough in these convictions to pray with fasting! This is the ecumenical movement at work – back to Rome!

See: Is the Church of Rome a Christian Church?

One Reply to “Rick Warren prays for new Pope”

Thank you for being one of the people who have visited this website!
Click here to see statistics on recent visitors.
Pages
Sites to visit